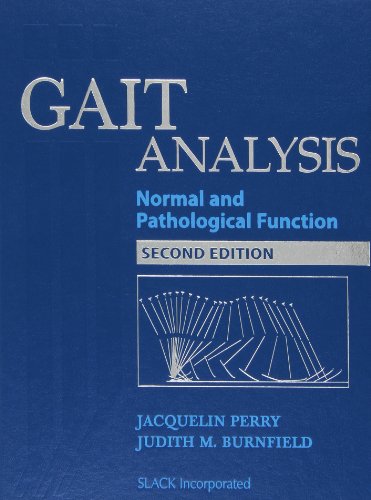 "This ... text from one (if not the) international expert in the field of gait analysis is all that was hoped for and more ... This gem should ... become the definitive text in the field."

"The author’s level of expertise and clear, logical presentation make this text a definitive reference for normal and pathological gait. Instructors will find parts of this text appropriate for entry-level as well as advanced students. Clinicians will use it to refine their skills in gait analysis and to learn about objective gait analysis systems."

Preparation for her current interest in gait began in college (UCLA). Her major in physical education (1935-1940) introduced her to anatomy and provided a strong background in kinesiology with application to both sports and corrective therapy for the disabled. Part of this experience was her attendance at the Physical Therapy Clinic of the Los Angeles Children’s Hospital where she began her exposure to disability. Subsequently she became a physical therapist (Walter Reed Army Hospital, 1941) which expanded her knowledge of anatomy, kinesiology, and disability.

Although her physical therapy experience was in army hospitals during World War II, the clinical exposure was very broad (1941-1945). In addition to working with a regular flow of trauma patients, she spent two years at a center that had army programs for poliomyelitis and rheumatoid arthritis. All three clinical areas involved a great deal of informal observational gait analysis as one sought to improve the patient’s ability to walk. During most of this time she was also an instructor at two of the Army schools of physical therapy (Hot Springs, AR and Denver, CO). There she taught anatomy, kinesiology and therapeutic exercise as well as the modalities. Both normal and disabled gait were strong elements of this program.

After the war ended, she used her GI bill to go to medical school (UC San Francisco, 1946-1950) for the specific purpose of becoming an orthopaedic surgeon. This led her to a residency in orthopaedic surgery (UCSF, 1951-1955) during the period when poliomyelitis and reconstructive surgery were strong clinical programs. Observational gait analysis and experience in correcting disabled gait became daily practice.

Her next move was in 1955 to join the staff of The Rancho Los Amigos Medical Center where she is currently Chief of Pathokinesiology. In 1955, poliomyelitis was the entire program. Disability of lower limbs, spine, and arms were all major concerns while bracing and reconstructive surgery received equal emphasis. Working with this program further expanded her knowledge of muscle function and gait disability. Also, her experiences in observing polio patients has exposed her to a number of different gait patterns as the type of paralysis resulting from this disease varies from patient to patient.

Following the introduction of the Salk vaccine, polio was conquered so Dr. Perry and her colleagues redirected their attention to other types of chronic impairment. This change was the beginning of their intensive rehabilitation program for spinal cord injury, hemiplegia, arthritis, and children’s disorders (primary muscular dystrophy, myelodysplasia, and cerebral palsy). Subsequently, amputees became a part of the program. At first the program was for general rehabilitation. Then as the patient groups became large, they formed separate clinical categories with a ward for each (1961). While continuing the polio spine surgery program, Dr. Perry also developed a stroke unit.

Responsibility for persons disabled by a stroke forced her to expand her analysis process as the functional pathology of the hemiplegic is much more complex than that of polio. Because the standard clinical examination findings correlated poorly with the gait dysfunctions, they initiated a system of observational gait analysis. Developed in conjunction with a group of dedicated and knowledgeable physical therapists, the Rancho Los Amigos Observational Gait Analysis System became highly organized. For the first time there was a means of cataloging the multiple dysfunctions that occur with the various types of pathology. For the past 15 plus years, they have taught this program nationwide. It is this program on which the organizational background of this book is based.

A second development was the gait laboratory (1968). Its initial purpose was to document the improvement resulting from reconstructive surgery in patients who could not be returned to normal. This system was designed to help ascertain whether or not surgery actually was the better alternative for these patients. Out of this beginning was developed a functional diagnostic system to be used for planning the reconstructive surgery of spastic patients. The emphasis of the program was, and still is, kinesiology electromyography because the primary disability of spastic patients is inappropriate muscle action (errors in timing and intensity). Footswitches were developed to define the patient’s stride characteristics, and an electrogoniometer, that accommodated for braces, was also developed. Clinical service and research have had equal emphasis from the beginning. Another novel emphasis has been on energy cost analysis of walking. An outdoor court was designed where habitual gait could be studied (Dr. Waters spearheaded this). Today, the laboratory is fully equipped with automated motion analysis (Vicon™) and force plates, and force sensing walking aids are being added.

All types of disability have been studied over the years and continue to be seen as the clinical need increases (cerebral palsy, hemiplegia, spinal cord injury, post polios, arthritis, joint replacement, amputees, myelodysplasia, and muscular dystrophy). At the Rancho Los Amigos Medical Center, current gait research is related to the effect of the new “energy storing” prosthetic feet for amputees.

Thus, Dr. Perry continues her lifelong dedication to the research and clinical application of gait. This publication encompasses the extensive work of Dr. Perry and her successful years as a therapist and a surgeon renowned for her expertise in human gait.